Seawater intrusion is a condition whereby groundwater is withdrawn at a faster rate than it can be replenished by rainfall. When groundwater levels are too low, the result is seawater moving into the freshwater aquifers. This condition can be irreversible and can result in rendering portions or possibly all of the groundwater aquifer unusable.

For many years, groundwater levels in our area have been dropping and remain too low to protect against seawater intrusion. Despite extensive conservation efforts by customers, the Mid-County Groundwater Basin is in a state of overdraft because more water is being pumped out annually than is naturally recharged through rainfall. Overdraft of the groundwater basin is not sustainable and seawater intrusion at the coastline is present in the Aptos, Seascape, and La Selva Beach area. The state of California has identified our region as one of 21 basins in the state as critically overdrafted, with a mandate to bring the basin back into sustainability by 2040.

The ideal balance in a coastal water cycle, when it comes to groundwater, is when the amount of water pumped out of the basin is naturally replenished by rainfall, and groundwater levels can maintain a level that provides an active barrier to keep saltwater from coming in.

Where the Intrusion Is Happening

The map below shows the chloride concentration for our coastal monitoring wells. It also shows all the municipal and private wells that share our basin. 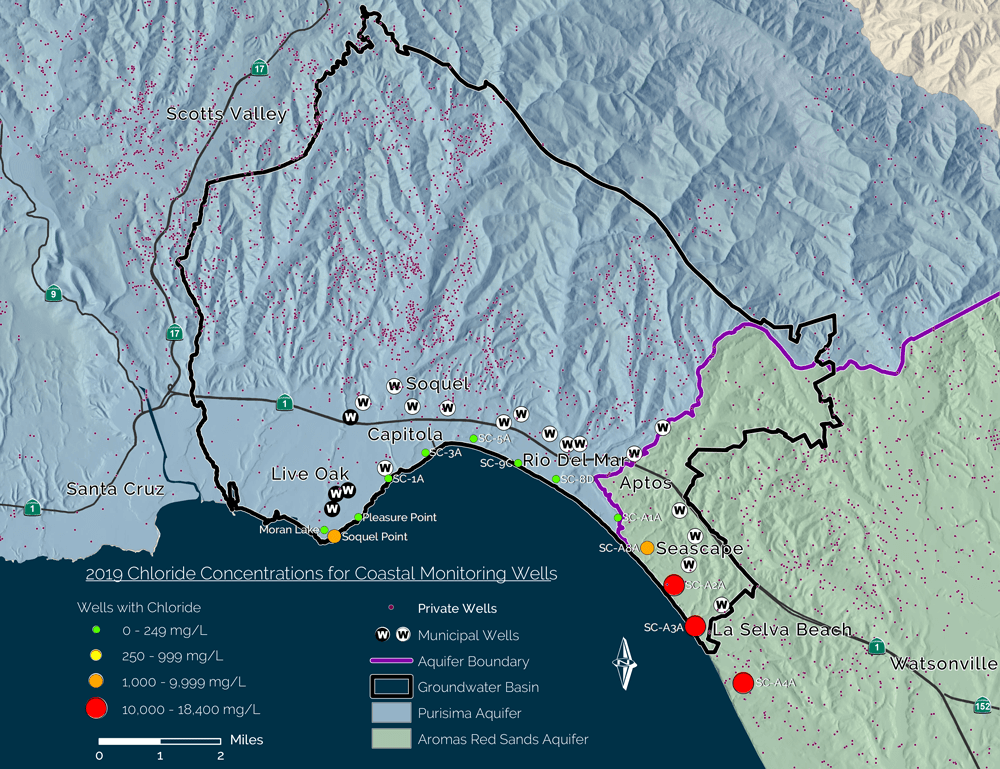 View the results of the 3D mapping of the seawater and freshwater interface just offshore of Capitola, Aptos and La Selva Beach, CA. The depth of the study reached up to 200 meters below mean sea level. Seawater/freshwater mapping project for the Santa Cruz Mid-County Groundwater Agency was done in May 2017 by SkyTEM, Ramboll and iGIS. Data visualization in GeoScene 3D.